The Paphos Forest is a vast wooden area on the north-western slopes of the Troodos Mountains in Cyprus. The forest extends over 10,000 hectares from sea level up to the peak of Tripilos Mount at 1,352 metres. This highly protected area is home to a diverse collection of flora and fauna, while it hosts a variety of interesting attractions. The management of the forest is under the supervision of the Forest Department of the Ministry of Agriculture, Rural Development and the Environment. 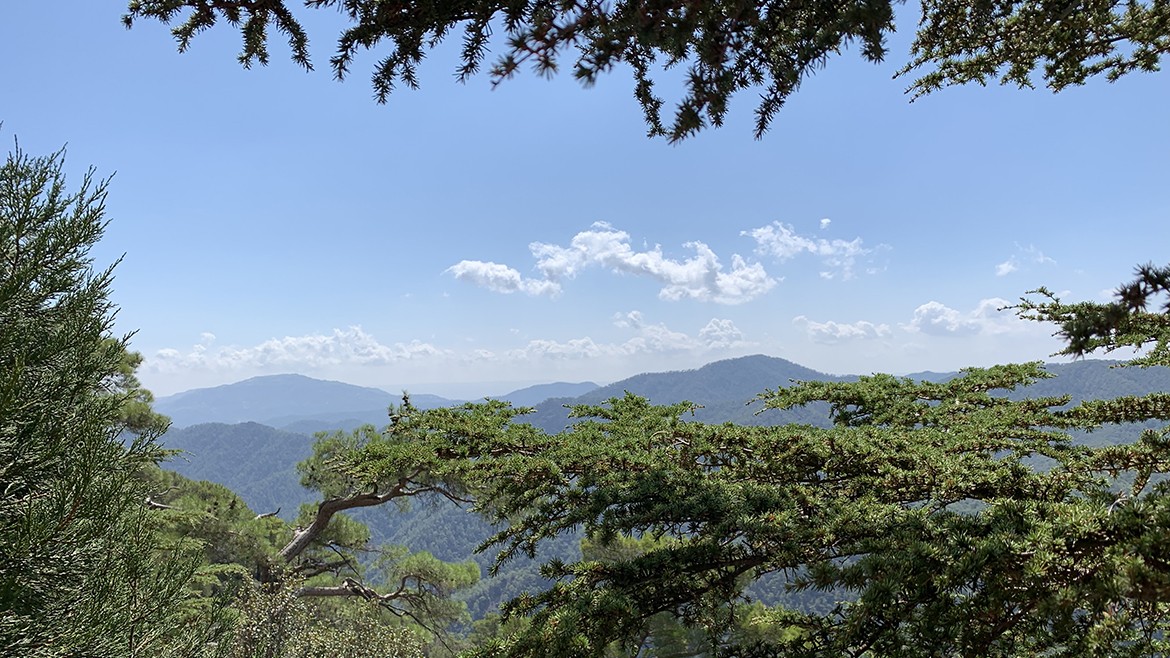 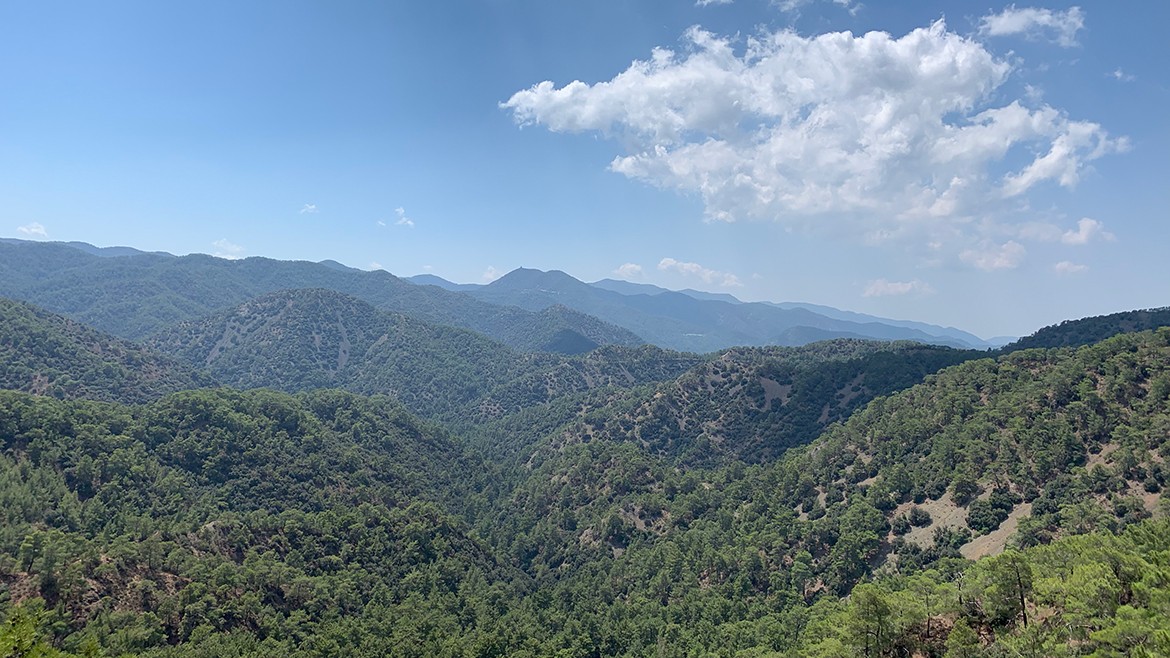 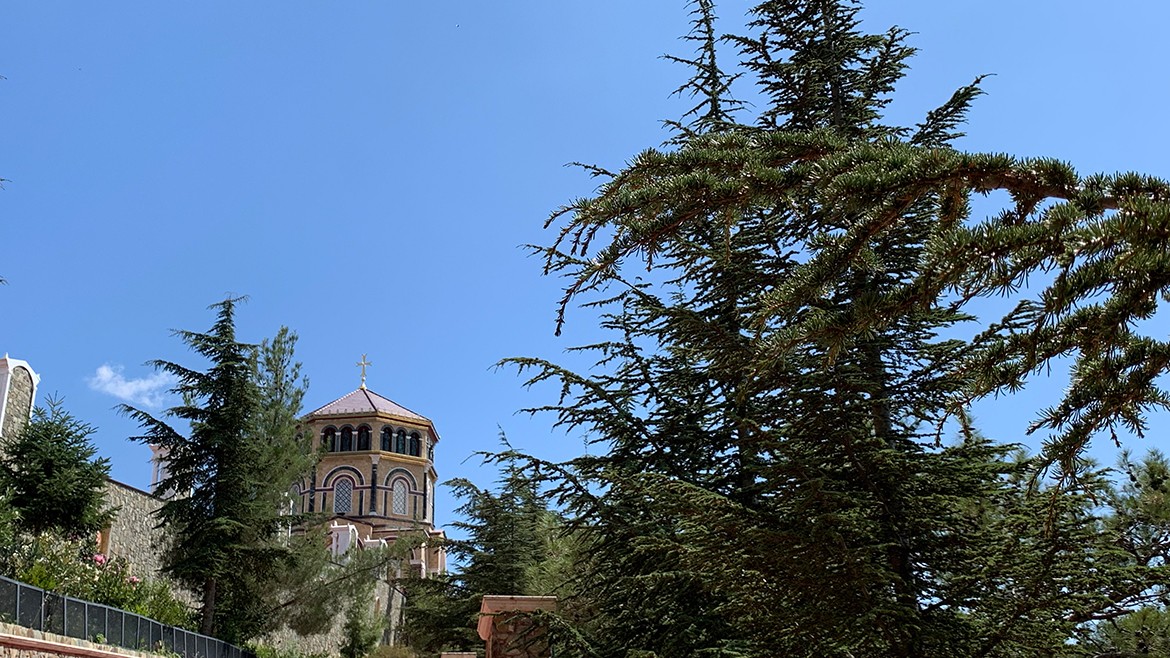 The erection of the Kykkos monastery in Cyprus dates back to the 11thcentury; it was built thanks to the donation of the Byzantine emperor and, therefore, it is known as the “Royal” Monastery. The Byzantine emperor also supported some nearby villages, with names related to mills. The choice of the site where the monastery was built, on a peak of the Troodos Mountains, in the Paphos Forest, with its underground water sources illustrates the significance of water for the independence of the Monastery. Of crucial importance is the “Hagiasma” (Holy Water Source) of the monastery, as well as other water-springs in nearby spots of the forest, which the Brotherhood regularly visits so that church services may be held. The palladium of the monastery, the holy icon painted, according to tradition, by St. Luke, is well-known for being miraculous, especially at times related to the periods of droughts of the island, when Kykkos-monks in procession uncovered the icon from its revetment and prayed for rain. It is characteristic that the Venetian documents refer to this icon, as “the Holy Virgin of the Rain”. 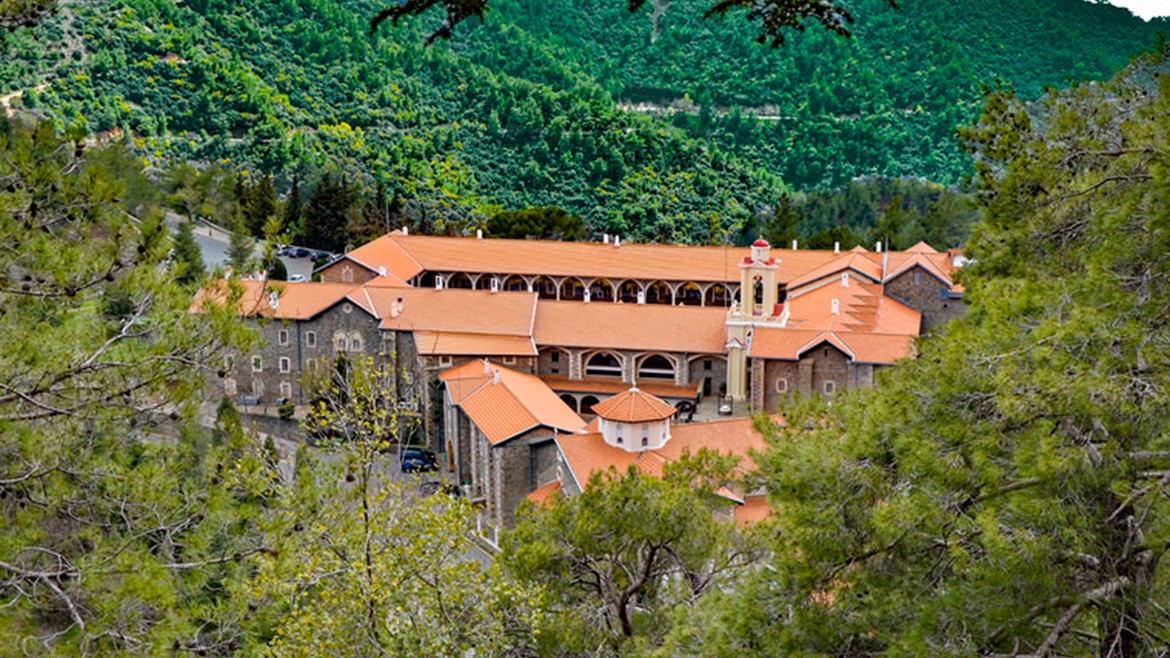 The Kykkos Monastery in Paphos Forest 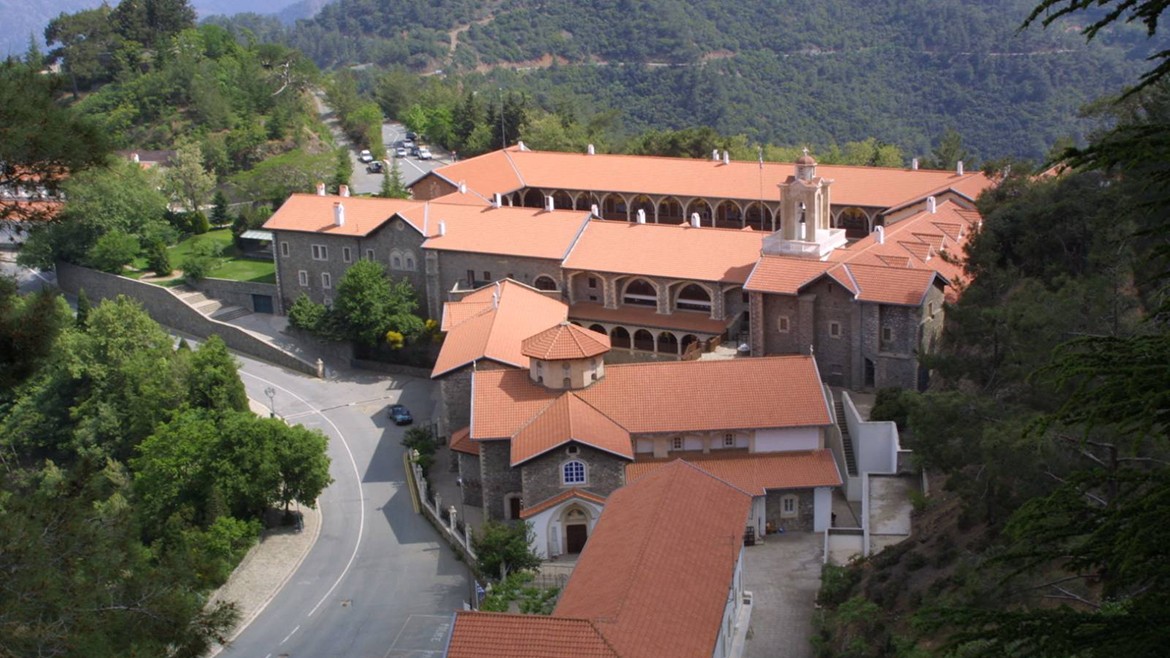 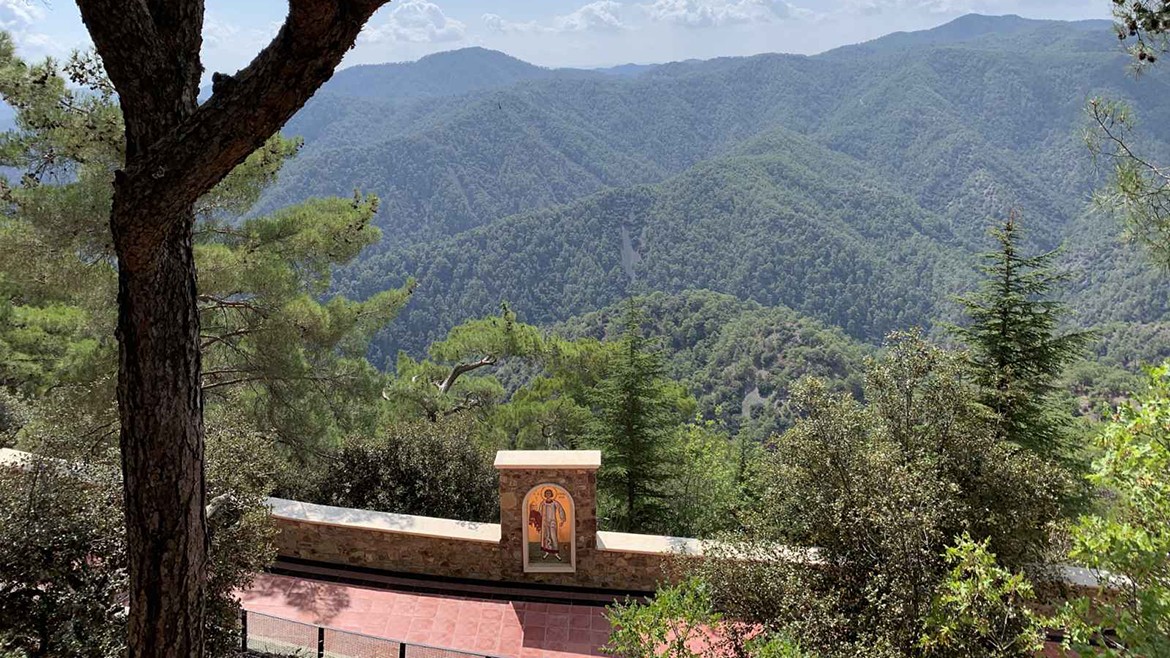 The water resources of the Paphos forest create small rivers, streams, springs, and waterfalls, which are related to the survival and life of the monks, visitors of the monastery and local farmers. Due to the droughts of Cyprus, the Kykkos-monastery built underground cisterns to collect rain water. Special Rules regulated the water distribution to farmers and nearby villages, as well as to the capital, Nicosia, the water supply of which came from the Metochia (Dependencies) of the Kykkos Monastery. In this framework, aqueducts, underground channels and water-deposits were built to ensure prompt distribution.

The Paphos Forest is the most extensive and, perhaps, the most important forest complex in Cyprus. Situated in the northwest part of the Troodos mountain range, the forest extends over an area of about 603 km2, of which 399 km2 are included in the Natura 2000 network. Two parts of the forest, namely, Cedar Valley and Mavri Gkremmi (Black Cliffs), have been designated as Nature Reserves and given protected status to ensure conservation of biodiversity,  and the species and habitats hosted there. 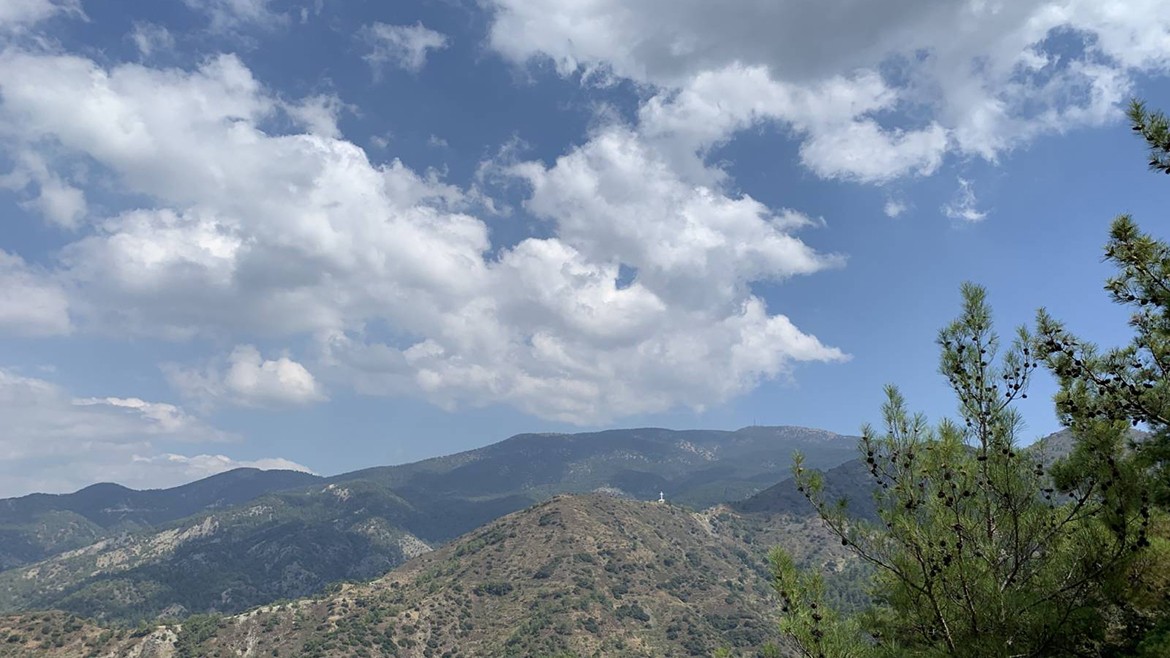 The climate is typically Mediterranean with prolonged dry and hot summers and short, rainy, but mild winters. Winter temperatures average 10oC at the lowest elevations and 5oC at the highest altitude (Tripylos Peak). The respective figures for summer are 35oC and 22oC. Mean annual precipitation ranges from 450mm in the lowlands, to 900 mm at the highest peaks.

The substrate of the site is predominantly composed of diabase rocks of Troodos ophiolite, flanked by diabase dykes and pillow lavas.  The topography is intensely mountainous with very steep slopes and narrow dry streambeds. 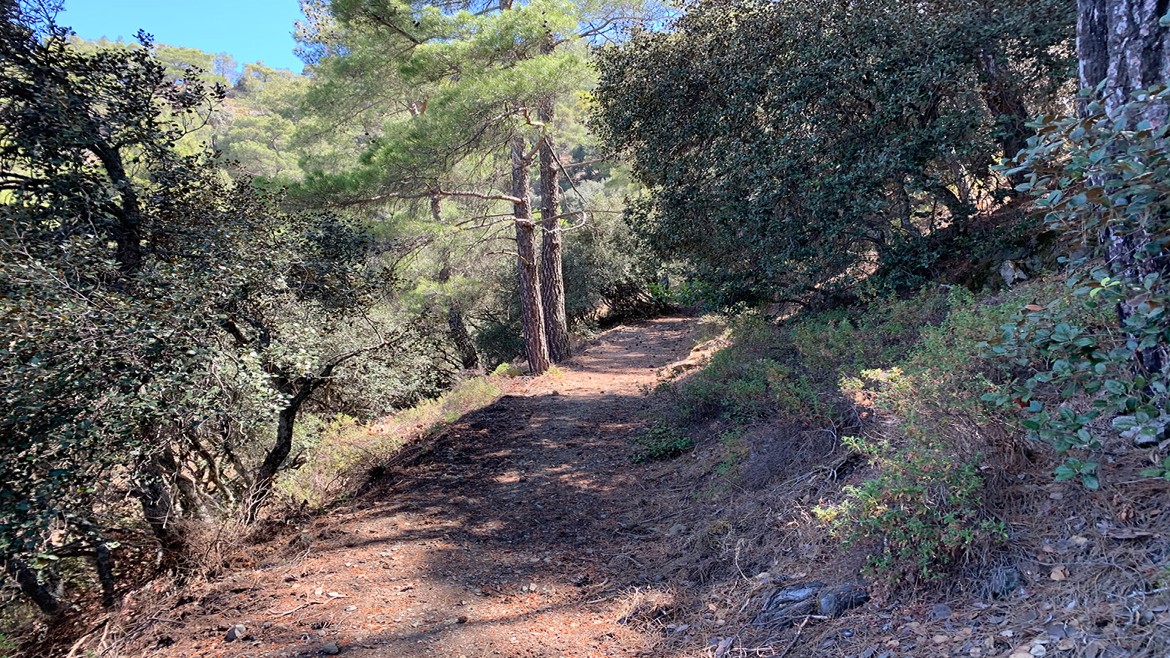 The Paphos Forest comprises extended natural habitats hosting a large number of flora and fauna species. The site includes fourteen habitat types (Annex I, 92/43/EEC), among which the most extensive and continuous forest ecosystem in Cyprus with the largest and most representative pine forest (habitat type 9540) on the island, ranging from the lowlands (200m) up to the peak of  Tripylos 1352m. Also, the site includes the priority habitat types of the unique endemic cedar forest (habitat type 9590*) and the scrub and low forest vegetation of the endemic Quercus alnifolia (habitat type 9390*).  Riparian vegetation encountered at all elevations, includes numerous broadleaves, such as Platanus orientalis, Alnus orientalis, Laurus nobilis, Myrtus communis, etc. In the lowlands, tree species become sparse and small shrubs (phrygana), as well as grasslands that make up rich and dense vegetation of high ecological and aesthetical value.

The number of flora species found in the Paphos Forest has been estimated to exceed 600. Fifty of these species are endemic, of which three plant species are listed in Annex II, 92/43/EEC. Ranunculus kykkoensis is a local wildflower, endemic to the forest of Paphos, Phlomis cypria subsp. occidentalis has its largest subpopulation within the site and Arabis kennedyae (priority species) appears at its westernmost distribution limit in the cedar valley.

The most characteristic plant species of the Paphos Forest are perhaps: the Cyprus Cedar (Cedrus brevifolia), Kykko Mustard (Eryssimum kykkoticum), Kykko Buttercup (Ranunculus kykkoensis) and the cordate-leaved Oregano (Origanum cordifolium). Many other species are also important, and included in the forest management.

The fauna of the site includes 24 species of Annex I (2009/147/EC), four of which are endemic to Cyprus, and 7 mammal species of Annex II, 92/43/EEC, of which the endemic Cyprus mouflon (Ovis orientalis ophion) that lives in the forest and its adjacent territory. In addition, the site supports a large part of the population of the endemic whip snake Coluber cypriensis (Annex II 92/43/EEC, priority species).

The Paphos Forest has been declared a Special Protection Area (SPA) according to the Birds Directive (79/409/ΕΕC), due to its high value for avifauna. It is considered to be the main habitat for Bonelli’s Eagle (Aquilla fasciata) and Goshawk (Accipiter gentilis); both are listed, together with other species, in the Annexes of the Birds Directive. About 100 bird species have so far been recorded in the Paphos Forest, of which 40 are permanent residents, 6 are endemic to Cyprus; most of them are protected by the Birds Directive. Herpetofauna is represented by 22 different species, the most important being the Cyprus Whip Snake (Coluber cypriensis), listed in Annex II of the Habitats Directive. Numerous insect species are also found, many of which are endemic; two of them are protected by the Habitats Directive, namely the endemic (Promomacrus cypriacus) and the Rhodes butterfly, which is rather rare in Cyprus (Callimorpha quadripunctaria). Important fauna species also include amphibians and, in particular, 3 frog species living on the island and, the fresh water Crab (Potamion potamios). There are also at least 10 different bat species recorded in the Paphos Forest, which are strictly protected species.

Paphos forest is considered a place of high natural and cultural national interest. It is a Balkan-Mediterranean territory included in the MοNa Project. According to the aim of this project, a series of workshops and activities will take place for creatively managing the co-existence of natural beauty and monuments: